Dieting and teaching – the first weeks back Is everyone watching me? Paranoia while working out 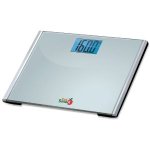 Bye-bye to the EatSmart scale

I gave it several weeks, but alas, I have opted to return my beautiful EatSmart digital scale. I was so excited to join the 21st century and get an EXACT measure of my weight. I have been jealous of those people who are actually logging their weight down to the tenth of a pound. On my old, trusty and rusty mechanical scale, I can only see whole pounds (sort of).

I was so happy to unpack that beautiful, modern EatSmart scale. Gorgeous! High tech! and, in my case, completely unreliable. On the website it is very clear that you have to place the scale on a flat, hard surface. I figured that would be no problem, as I don’t have any carpeting in my house, only tile. Alas, the tile I have is a textured. I could not find a single place in the home that would give me consistent reads on the scale. I had kept my trusty and rusty old scale as a comparison, as well as comparing to my weight at the local grocery store. I was consistently losing on both of those scales, but not on the EatSmart.

How I hated boxing up that beautiful scale. So many people have great success with that scale. I’m just not one of those people. Pity, I really wanted to track a more accurate weight. Does anyone know of a digital scale that would not be affected by a textured floor?

2 Responses to Bye-bye to the EatSmart scale