Coming out of the closet – telling friends about my weight journey I hate how I look: am I really that fat? 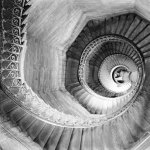 Climacophobia, it’s not a fear you see mentioned often. Climacophobia is the fear of climbing stairs. As an obese person, stairs are a great challenge for me. One of my great “wake up” moments about my weight came a few months ago. I’m a member of Toastmasters and our latest meeting was rescheduled to a location I had never visited before. The meeting was at a neighborhood clubhouse. When I arrived, to my horror, I discovered that the meeting was upstairs and that the elevator was out.

As I stood at the foot of those stairs looking up (and up and up), I quaked in fear. I couldn’t even remember the last time I had climbed a flight of stairs. I was actually trembling as I grabbed both rails and started up the stairs, using my arms to pull me up each step. My heart was pounding with each step. My legs felt like they couldn’t hold me. My knees felt empty and hollow.  I had to pause often up that one flight of stairs. As I got to the top, I was gulping for air. I had to hide myself in the bathroom to collect myself — I didn’t want any of my friends to see my shame.

The worst part was knowing that I had to go down them again. If you’ve never been in such sad shape as I am, you may not realize that going down stairs causes more pain than going up. According to Medline Plus, every pound of extra weight you carry puts five pounds of pressure on the knees when walking down stairs. Being morbidly obese, that’s a lot of pressure on the knees. Or you can calculate the stress on the knee when descending stairs as 3.5 times your body weight.  So, I was putting over 1,000 pounds of stress on my knees.

I made my excuses at the meeting, saying I had to leave early before the end of the meeting. My early departure was to cover the extra time I would need to climb down the stairs. I wanted no one to see the pain of my slow progress down one step at a time.

But that was then, this is now. I had a major NSV the other day (that’s a non-scale victory).

I was attending a performance of Circus Sarasota at the Asolo Theater with a group from my church. I had car-pooled with a friend who had her two grandsons with her. The tickets were for general seating. And as we arrived, there were few seats downstairs where the little ones could see well. My friend suggested checking the seating  upstairs, and I said, “Great idea, let’s check it out.” I climbed the stairs to the first balcony, looked around and up, and saw that there were unobstructed seats one more flight up. “Let’s go to the next balcony, there’s empty seats right in the center, the boys will have a great view.” I started to lead them up to the next level when I stopped dead at the foot of the next stairs.

Instantly I flashed back to that Toastmasters meeting and was about to make my excuses. Until I realized, “Wait, I just climbed a flight of stairs. I’m not winded. I’m not in pain.” I had not even thought about my fear of stairs just moments before. I had gone up the stairs, unthinking, just like one of beautiful people of this world. I must have really puzzled my friend as I turned to her with a broad grin and said, “Yes, let’s go up to the next balcony. Follow me!” And I started laughing like a madwoman as I climbed the stairs, nearly running — which wasn’t too smart of me, because I was somewhat winded when I made the top of the stairs, but I was still laughing as I led my friend and the two kids to the prime seating in the front row.

If you’ve been reading my blog, you’ll know that I have been forcing myself to do step aerobic exercises. I force myself by putting the step across the entryway to the bathroom. Before I can “go,” I have to step. At first, I just stepped over. Slowly I added short routines. After a week, I added a riser. Now, I do at least a five-minute routine on the step before entering the rest room, where, by that time, I really do need to rest.

I didn’t think I was really making much progress. But my body and my subconscious knew better than I how much stronger I had become. Without thinking at the circus, I performed my own amazing feat of daring by climbing that first stairway without even thinking. Granted, my knees screamed at me as we later walked down the two flights of stairs. But I was still laughing even though I hurt.

I think my Climacophobia may be gone.